Mikiyo Nakajima, who is currently an instructor at Urasenke in Kamakura, has been an acquaintance of ours for 27 years. She was the first English student we had after establishing NACOS in Honolulu. We have remained friends, and we currently live within walking distance from each other. We get together whenever we can make time. She was the first person to whom we introduced the special project at Hawaii Pacific Press after receiving our own invitation from Mr. Nakamine.
(- Michiko Nakamura)

9 Years in Hawaii
by Sobi Nakajima – Instructor at Urasenke

It’s been 17 years since I returned to Japan, but it feels like only yesterday. My nine year Hawaiian sojourn is sadly a thing of the past, and yet fond memories of that crystal clear sky and those azure waters still float through my mind. My life in Hawaii’s perfect climate, surrounded by its lush environment, was easy and carefree. It was my rakuen – my paradise.

I have lived in Kamakura ever since coming back to Japan. Kamakura, the old base of power for the Samurai, is often referred to as Shonan. Often referred to as Shonan, Kamakura is the old base of power for the Samurai. The area’s popularity has surged recently, and it is now considered the third most desirable area to live in the Japan. This popularity is probably due to the area’s ideal location 1 hour away from Tokyo by train coupled with the natural beauty of a wide open ocean on one side and mountain ranges on the other. Every year, a wide variety of tourists flood the area – not just from Japan, but from many other countries too.

In Kamakura, I am still very close to the ocean – I live on the Zaimokuza coast. On days when the weather is good, one can clearly see Enoshima and the Izu peninsula. With a bit of luck, one can even spot Mt. Fuji in the distance. Watersports are very popular, and on holidays many surfers come to seek out good waves. There are also many hula dancers. Last year, a hula group from Hilo gave a traditional hula performance on the pavilion at the Tsurugaoka Hachimangu Shrine. Looking at all of these things together, one gets the sense that Hawaii and Kamakura are really not so different.

As far as my job goes, I do the same thing here as I did in Hawaii: I teach the traditional Japanese tea ceremony. As you know, Kamakura is a land of many Buddhist temples and Shinto shrines. Since these locations are often used to hold chakai (traditional tea parties), this area is also a bastion of the tea ceremony. However, the overall state of this and other traditions is deplorable. These days, the number of young people who study the tea ceremony has dwindled, but this is merely one aspect of a growing neglect for traditional Japanese culture as a whole. Although modern life is more hectic than ever, it is for that very reason that we should learn to slow down, breathe a little, and gain an appreciation for the changing of the seasons. I would also like to see people using the tea ceremony to learn hospitality and consideration for others.

It was difficult to continue the unique Japanese appreciation of the seasons while in Hawaii, the land of eternal summer. However, we came up with ways to adapt it to our circumstances and our surroundings. If Japanese confectioneries were unavailable, we would come up with our own creations; for the ceremonies themselves, we would use what tools we had available. In this way, we were able to enjoy a uniquely Hawaiian tea ceremony. I ended up gaining a deeper appreciation of tea through that experience, and I am now dedicated to using my humble abilities every day to impart what I have learned. Even so, when I see a Hawaiian vista on TV, my fond memories of Hawaii surface once again and I am filled with the desire to go there and live a few more moments of life in that easy and carefree paradise.

Photo:
A moon-themed arrangement in a tokonoma (a decorative area in a traditional Japanese room). Practicing at the Tsurugaoka Hachimanguu. 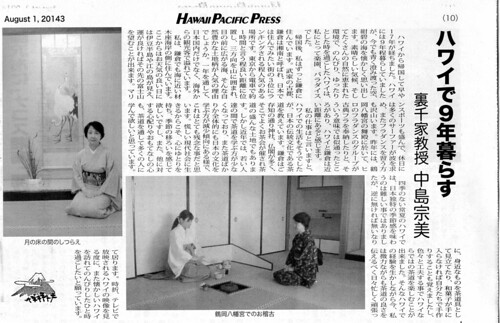