The Latest News from Fujisawa 近況報告 藤沢より
In January 2014, half a year after our hectic transition from Hawaii to Japan, we received an email from the president of Hawaii Pacific Press, Kazuo Nakamine. In March, we sent in a submission detailing our transfer from Hawaii to Japan. It was published over the summer, about a year after our move, and so the excited feelings we have from that time are once again in our hearts. To all of our friends in Hawaii: please let us know how things are going when you get a chance. We are thankful for all that you have done for us, and we are certain that our bonds will remain strong long into the future.
(- Michiko Nakamura)

August 1, 2014 — Hawaii Pacific Press
Mr. Nakamine recently made a most welcome request for us to write an article about our fond recollections of Hawaii. As husband and wife, we moved from Kyoto to Honolulu in 1987, where we established NACOS International Institute. Until we switched locations to Japan in 2013, we were blessed for the span of a quarter century with the chance to meet many wonderful people. Mr. Nakamine of the Hawaii Pacific Press is a distinguished member of that group. Our relationship with Mr. Nakamine has endured for over 20 years, and we have written regular articles for his paper, the Hawaii Pacific Press. We now humbly submit one more article with profound gratitude for the deep bonds that we have been able to maintain with our esteemed colleague.

On July 15, 2013, the day of the Gion festival, we departed from the familiar comfort of Hawaii and made our way to Japan. For the first time in 25 years, we found ourselves right in the middle of a hot and humid Japanese summer. As soon as we finished some business in Kansai, we headed through our home town of Kyoto and on to Kanto. It was there that we had decided to establish our new base of operations: NACOS Shonan, in Fujisawa. We had departed from Honolulu, our longtime home in the heart of the Pacific, and begun a new chapter in Zengyo, in the heart of Fujisawa city.

There were two major reasons that we had chosen Fujisawa city. The first was that our close friend and web developer, Cory Morrison, lived there. At NACOS, we have developed and implemented a proprietary method for language acquisition called the NACOS method. As the internet grew year by year, we began to realize that our method would be most effectively implemented online. Some of our members naturally came to be involved in the development of our website. Cory Morrison was one such person, and he ended up moving from Hawaii to Fujisawa to begin work as a web developer. Through our Skype and email correspondence with him, we came to learn that Fujisawa was close to Tokyo and had a relaxing atmosphere that would make life there easy. As we reviewed potential destinations for our return to Japan, the Shonan region gradually captured our interest. At first, we had wanted to push our boundaries just a bit by living somewhere moderately far removed from the house we own in Kyoto; in other words, somewhere in the Kansai region. However, it became clear in the end that Fujisawa was appropriate for us to develop the NACOS method via skype and to work on new internet-based projects. After living here for a while, we have confirmed that NACOS members from Hawaii or elsewhere in America have an easy time visiting us here. As part of their plans to visit Japan, or perhaps on the way back from a business trip in Taiwan, Hong Kong or Southeast Asia, our friends can hop over from Tōkyō without much trouble. They are able to experience a feeling of homecoming right here in Japan. As we continue to strengthen the NACOS network through Skype and through the internet, we are also seeing the steady growth of a tightly knit NACOS community.

The exuberant feeling of living in Honolulu close to Diamond Head has continued at NACOS Shonan under the watch of Mt. Fuji. We are not really separated; rather, strong bonds shall keep us connected into the future. Chay Schiller has taken over the NACOS Hawaii branch and continues to strive for the perfection of the NACOS method as we maintain a constant dialogue via email and Skype. The years we spent living under the beauty of Diamond Head have drifted by unhurriedly, and yet they now seem to have expired in no time at all. If there were only one thing about Hawaii for which we felt a fierce nostalgia, it would surely be the beautiful Diamond Head ocean vista. Although we seldom ventured into the ocean, we loved Honolulu with its popular destinations, its crowded streets, and the beautiful nature that surrounded it. Here in the Zengyo district, we are also blessed with friendly streets, and Mt. Fuji stands before us as though smiling with a neighborly face. The people of Fujisawa are laid back, just like in Hawaii. We have made a smooth transition to this area and we are already setting down our roots here. Towards the end of the year, we received an invitation for Michiko to give a violin performance at the Greenlife Shonan nursing home. We are bringing language and music into a new land, and so the NACOS community continues to widen. Like the fabled turtle, we shall slowly and steadily continue to cultivate the the richness that Hawaii has left in our hearts. Above all else, the most precious treasures we found in Hawaii have been the people, such as Mr. Nakamine. The beauty of Hawaii will also remain an important memory. After we have settled down a bit, we hope to continue visiting Hawaii whenever we can out of appreciation for all it has done for us.

Photo：
A recent photo of Mr. Shuzo Nakamura
A violin performance given at a nursing home near the end of last year 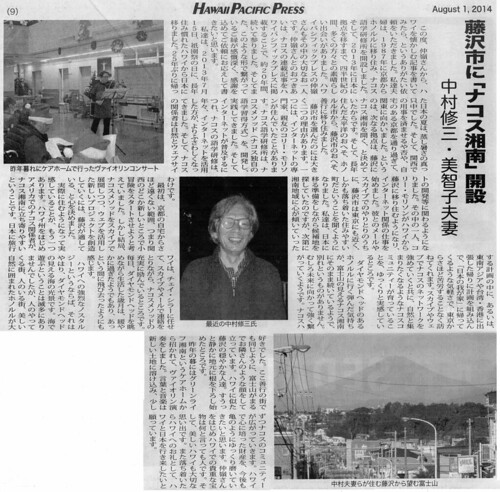