In January 2014, half a year after our hectic transition from Hawaii to Japan, we received an email from the president of Hawaii Pacific Press, Kazuo Nakamine, regarding a project for a special edition of his paper. On August 1, the special edition was published with our article included. The following is the editor’s introduction to the contents of this section, appearing at the top of the front page.
(- Michiko Nakamura)

August 1, 2014
Hawaii Pacific Press
“Remembering Hawaii – The Stories of Those Who Returned to Japan.”
Special update on nine Japanese “bubble businessmen” who used to work in Hawaii!

The bubble economy was a golden time from the mid-eighties to the early nineties when Japanese-led ventures in Hawaii were at their peak. What has become of the Japanese businessmen that flourished in Hawaii during this time? Surely, there are many who would like to know.

Accordingly, we at Hawaii Pacific Press resolved to learn what had become of these bubble businessmen. We now present their stories in a special section of our 37th anniversary publication, entitled “Remembering Hawaii – The Stories of Those Who Returned to Japan.”

In January, soon after this project’s conception, Kazuo Nakamine, the president of this paper, contacted three longtime friends to inform them of the project and request their participation. They are Hiroshi Miyamura of Nomura Securities, currently living in Tokyo, and Shuzo and Michiko Nakamura, who just moved back to Japan last year after 25 years in Hawaii and currently live in Fujisawa.

All three of them agreed it was a good idea, and they graciously took the further step of encouraging more potential contributors to compose and submit articles about their memories of Hawaii and their lives after returning to Japan.

Results began to appear in short order. In early March, articles arrived from Mr. and Mrs. Nakamura and from Mrs. Nakajima Sobi, whom the couple had introduced to the project. In April, we were happy to receive emails from each of the contributors that Mr. Miyamura had recommended: Atsuki Fukuda from Tokyo Optical, Tadamichi Okubo from Japan Air Lines, Toru Asano from Ajinomoto, and Hironori Maruyama from All Nippon Airways. Each of these men supported us in the past by paying for advertising during the infancy the Hawaii Pacific Press, right after our launch, and we are deeply indebted to them.

Then, as we approached the submission deadline at the end of May, our contributors swelled to nine people with Tomoyuki Murayama from Tokai Bank, Hideaki Saeki from UCC Coffee, and finally Hiroshi Miyamura. The end result has far exceeded our expectations.

Looking over these submissions, we can tell that things have gone well for each of our bubble businessmen after returning to Japan. They have been entrusted with important positions and have moved on the enter the elite within their companies. There are also those who have retired, and have either taken up teaching at a university or improved their English and assumed important roles abroad.

For some of our contributors, such as Mr. Asano, living in Hawaii represented a life turning point. For all of them, Hawaii has become a second home. Some return every year on vacation.

The following are the submissions from all nine people, printed in one compilation.

One last thing – there is a group in Tokyo known as the Tokyo Hawaii Asunaro Club. Its membership was 69 in December 1993, and it had 38 registered members in July 2011. I understand that they often get together and play golf. 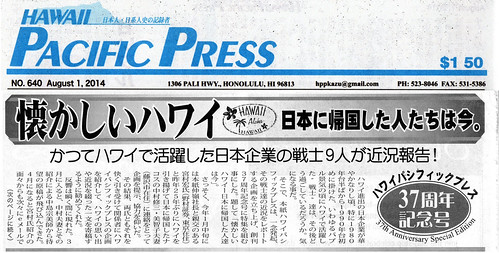